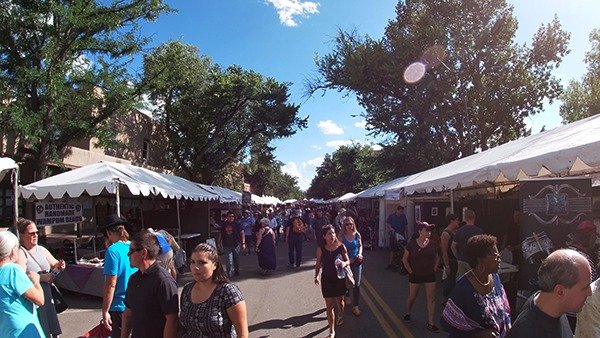 SANTA FE—The American Indian art and people of the 98th Santa Fe Indian Market have returned to their respective homes.

But for one weekend, from Aug. 16-18, the Santa Fe Plaza was the center of the Native American universe as jewelers, painters, sculptors, photographers, writers, clothing designers, filmmakers and all people in between converged for the Indian Market.

Countless Navajo artists participated in the 2019 Indian Market across various mediums. Some have been attending the event for a decade or more. Others were recently introduced to the Market, but all said they have love for what the annual event has to offer.

Cannes of the Indian Art World

Lyndon Tsosie, proprietor of the House of Stamps, has participated in the Indian Market countless times.

For the 2019 Indian Market, he brought 14 jewelry pieces to show, ranging from bracelets, rings and necklaces, including his showstoppers, “If Carl Fabergé was Navajo,” and “The Air People and Their Tea.”

However, it was a bracelet completed during the early morning hours of Aug. 14, Navajo Code Talkers Day, that captured the imagination of Navajo veterans and citizens alike.

He noted that his paternal uncle was Roy Begay, one of the Original 29 Navajo Code Talkers. Because of this, Tsosie knew the stories about the code, its top secret status and the various animal names and their designation for military hardware.

“I kind of understood those stories, so I just sort of put it into a bracelet,” he said.

The sterling silver bracelet weighed 11 ounces and featured numerous stamps, centered with an insect from the First World, with Japanese Imperial Battleships and Zeros on one side of the cuff and on the other side, the Navajo code in the form of animals, arrows, arrowheads and stars. The shape of Mount Suribachi was also included.

“It had a whale, turtle and bird, these were the codes they used, which were shooting out arrows, arrowheads and stars from their body. They went around the bracelet to the airplanes and ships on the other side of the design,” Tsosie said. “That really represented the Japanese forces being destroyed by the Navajo code.”

The inside of the bracelet cuff featured a lithograph of the Original 29 with the following engraved stamp: “Navajo Code Talker Series No. 1 – This is dedicated to the Original 29 & the 420 + young men who fought valiantly to win WWII for a country that still considers us wards of this government…”

Tsosie said the bracelet will be series. He sold the bracelet for $7,200 and because of this, it wasn’t entered into the Indian Market.

“If you have never been to the Santa Fe Indian Market, you need to put this on your bucket list. As I’ve always said, Indian Market is the Cannes of the Indian Art World,” he said.

Navajo artist Ryan Singer has attended the Indian Market for at least 10 years now, after getting his initial introduction through his show at the El Dorado Hotel in 2003.

“This is a good market. This is where I met a lot of my clients that I still have today,” he said.

Singer stood before a wall of paintings, many of them created in his surreal, pop art style that has been his calling card in the Native American art world.

One painting featured dark clouds in the horizon, with Shiprock dominating the canvas. Atop the Shiprock pinnacle was a green pterodactyl, which was as monolithic as the rock formation itself.

Singer explained the painting’s genesis: “I had this idea for a long time. I’ve always had the Navajo mythology and the Shiprock on my mind when I’d drive by there. I’d imagine that it was a giant pterodactyl because of the stories.”

He spent two weeks working on the painting, averaging about eight to 10 hours each day, on a work that originally began as a sketch.

Another painting, titled, “Manifest Destiny,” features a family of Sea Monkeys posing on a beach towel for a photo, with the Mittens of Monument Valley in the background. The painting reveals that the family is actually inside a handheld water game.

“You’d see these ads in comic books for Sea Monkeys and they’d always be doing things like lifting weights and playing games, like they’re real people. They’re obviously not real,” he said. “This was an old idea playing with the image of Sea Monkeys, pop culture and manifest destiny.”

Singer said much of his art is steeped in parallel universes and other dimensions with science fiction elements such as UFOs, Bigfoot and time travel. Aliens and dinosaurs are other favorite themes in his art, most notably, characters from the Star Wars universe.

His advice for artists and art enthusiasts alike is to keep an open mind. Look around and enjoy what’s out there (at Indian Market), he said.

“There’s always going to be obstacles, no matter what. If you want to get to some point, get to it. Keep getting up,” Singer said.

JT Willie is the executive director of the Navajo Nation Division of Economic Development. He has participated in the Indian Market for a decade, selling his blend of silver pieces inlaid with beaded floral designs.

“I sold a bag earlier, a beaded purse of the Navajo Tree of Life,” he said.

The purse featured a beaded scene that depicts a green Navajo cornstalk rising from the center, with birds around the sides of the corn stalk. It is growing from a Navajo basket. The purse itself is made from brown leather with the corners tied with multi-colored fringed yarn.

Willie said he creates a lot of handmade silver beads, often fashioned from dimes. One necklace also featured his unique blend of bead work and silver for the pendant piece shaped like a tulip.

“What I’m known for is doing a combination of bead work with the silver work. The beads reflect floral designs and it’s set in sterling silver,” he said. “I also do that same technique with the style of rings that I do.”

He credits his family for his start in silversmithing and noted that creating jewelry is a family trait.

Willie said during his career working for Navajo Arts and Crafts Enterprise as the sales and marketing manager, he learned from silversmiths at the company, especially the late Ronald Coan.

“The bump-out style (repousse) is actually something I learned from Ronald. We used to work together on a lot of projects,” he said.

Like many of the artists at the Indian Market, Willie said his silversmithing was an escape from the everyday humdrum world and an outlet for his personal expression on life.

“I always tell people my bead work, my jewelry, takes me away from the reality of life. Continue to share the art. Be all about the art. Navajo jewelry has been around for centuries and it’s our intentions to really push this forward to our next generations,” he said.

Karl Jim works as the brand manager for Navajo Nation Gaming Enterprise. During his free time, he works with acrylic paints for his thought-provoking paintings.

It was his third year showing at the Indian Market and he was happy to share his paintings with the intelligentsia of the Indian art world.

Pointing to one of his abstract paintings, Jim said it was titled, “A Good Conversation.”

“There’s a horse in here and there’s two people talking, interacting. It’s just a good conversation that builds upon each other,” he said.

Another painting, titled “Connections,” features an electrical outlet in the foreground with a mosaic of other patterns in the background.

“I’ve always been lucky enough to have (electrical) power,” he said. “Out of that, I’ve had so many connections, positive and negative, good, bad, whatever. But they all build upon each other and these are the different types of relationships based off of power.”

Jim has been painting for the past 10 years and said that he utilizes his time painting as an outlet for stress relief. He said working for Navajo Gaming is a mix of maintaining corporate identity, running day-to-day operations on designs and advertising, and the grind of 18-hour days to get the job done.

“This is an after-work kind of thing,” he said of his artistic endeavors.

In 1999, he created 21 Native, a website that focused on art, music, graphics and more. He said it bolstered his creativity and taught him how to complete multiple projects at a time.

“Basically, it was just the 21st century Native living in two worlds and succeeding at both. Just really strategizing, conceptualizing and thinking ahead,” he said.

It was his 29th appearance in the Indian Market and he was showcasing a number of sculptures that he created from Utah alabaster.

“I enjoy what I do,” he said, noting that he works with Portugese marble, Belgian marble and Italian marble.

Local stones from Cedar City, Utah was what he carved his Indian Market pieces from.

One sculpture titled, “Lovely,” featured an intricate sculptured gray female face coming out of a white rock, which was shaped as her hair. At the center was a small heart. The piece took about a week to sculpt, even with the use of power tools, diamonds and grinders.

“I’ve always been an artist, ever since I was a kid. I was an illustrator for the U.S. Army for quite few years. I got out and started my artwork again and here I am, still at it,” he said.

Nez had two larger contemporary pieces, which he said were experiments in creativity.

His advice for up-and-coming artists was straightforward: “Work hard. We all get somewhere by working hard and being very industrious and dedicated to the work that we do.”

She said this year’s sales were “excellent” and that her Indian Market transactions were one of the best that she’s had in recent years.

Her jewelry is in high demand from customers, including NACE.

“I miss going to Navajo Arts and Crafts Enterprise,” she said. “Julia (Hoskie) has been asking for more rings and bracelets as soon as I have enough extra inventory.”